“Where did you get the idea for the book?” This is one of the questions Mrs. Schmidt’s class wanted to know. It’s a good question. Where do ideas come from?

Writing is different for every writer. Many writers say you should write from experience. You write from who you are. I don’t see how a writer can do anything else. Even those things you imagine come from your experience of imagining and wondering. An imagined experience is filtered through your life-experience. Somebody else, with very different experiences might imagine the same thing very differently.

The trilogy started years ago when my daughter was a toddler. I’m a grandmother now, so that shows you how long the ideas incubated. We were visiting family in California. An uncle told us that his father worked for the railroad. His grandparents lived in California, so he and his brother used to take the train all the way from Missouri to California every summer by themselves.

I got to thinking about what kind of mischief you could get into when you’re eight or eleven or twelve and riding on a train without a parent or somebody to look after you. Sometime later I happened to read a newspaper article about private railroad cars. People can buy or lease their own car and have it all fixed up for luxury traveling. So what if you’re a kid exploring the train and you accidentally got into a private car?

Now here is the beginning of a story. Two ideas from very different experiences are connected. But I had a question.  Who might they run into?  What might happen to them? I began imagining a quest. Then it seemed wrong to have two boys and no girls, so I decided there would be two girls as well. Book three in the trilogy was off to a start, even though I didn’t know it was book three.

Experiences, questions, and curiosity are the stuff that help to build a story. I’ll talk more about the ideas in another post. Maybe you have a question or an idea to share.

Here is an excerpt from an article about The Alabaster Box. Mrs. Katie Schmidt and her fifth grade class at Rodgers Forge Elementary School in Baltimore have read the book and given me helpful feedback. It all started when my daughter had a parent-teacher conference. Mrs. Schmidt pointed out that Amelia (my granddaughter) has a great sense of story. My daughter, Liesl, told her about the book. I consider Amelia my Junior Editor.

When they finished reading the book, I visited the class to talk about the experience of writing. The visit was on Read Across America Day.  The article appeared in The Baltimore Sun and The Towson Times: 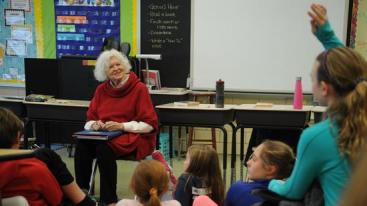 “Frances Schoonmaker has found a unique focus group to test-read the first in a series of adolescent novels she has written and would like to see published — a classroom full of fifth grade students at the neighborhood elementary school.

“For the past month and a half, students in Katie Schmidt’s 5th-grade class at Rodgers Forge Elementary School — including Schoonmaker’s granddaughter, Amelia — have listened as Schmidt has read to them each day from the first book in a series of three written by the retired professor and teacher. “The Alabaster Box” is a story set in the 1840s, just prior to the country’s gold rush, which tells the story of an 11-year-old girl who  opens a magical box and must deal with the consequences.”

“If it had been left up to Grace, they would have stayed home. But she didn’t get to choose. With land opening up in the West, her father and mother wanted go to California and start a medical school. So, sorry or not, she had to leave nearly everybody and everything she had ever known and loved in St. Louis, Missouri where she had lived her whole safe, comfortable life.”

This is the opening paragraph of The Alabaster Box.  Maybe you have a question for me. You may ask questions about the story or about writing the story. I’ll do my best to answer. You can also tell me what you liked and wanted more of as well as what didn’t work for you. You will see some comments below. You can enter your own comments or respond to somebody else’s comment. Scroll down to the bottom of the page and you will find the place to reply.

If you haven’t read the book, I hope this makes you curious enough to want to read it when it is published.